The Australian Terrier is a small breed of dog in the terrier family. A sturdy low-set dog, rather long in proportion to height with strong Terrier character, alertness, activity and soundness. Its untrimmed, harsh coat with definite ruff around the neck extending to the breastbone and its long strong head assist in developing its hard bitten, rugged appearance.

Appearance
The Australian Terrier stands around 25 centimeters high at the withers and weighs around 7 kgs. It is a low-set dog; the length of its body is longer than its height at the withers. The Aussie has a high-set tail that is not now docked in Australia.

The head of the Australian Terrier is elongated, with a slight stop and pricked ears. The ANKC breed standard describes the dog's look as "hard bitten" and "rugged". The eyes are small, dark, and oval and must have a keen terrier expression. The leather of the nose runs up to the bridge of the muzzle, which is described as "strong".

The dog's coat is rough or harsh to the touch, with a soft undercoat and a distinctive ruff around the neck. Australian Terriers shed little hair. The breed standard specifies that it should be untrimmed, but some prefer to neaten the dog for the show ring. Acceptable colours are blue and tan, red or sandy.

The Australian Terrier has medium sized triangular ears which are very flexible. The ruff around the neck complements its appearance. It is a great companion dog. 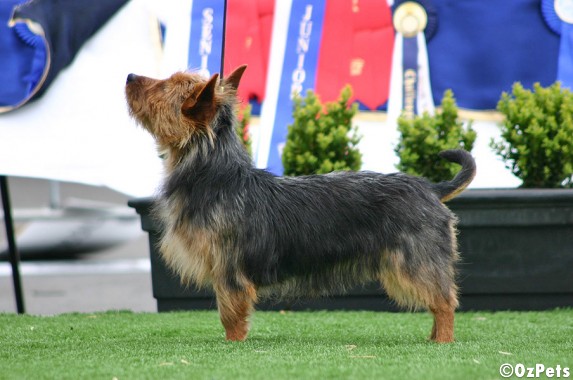 Temperament
The Aussie should have the personality of a working terrier; its even disposition and outgoing personality makes it an ideal companion dog. It is loyal and eager to please its owner, but can be hard to housetrain. They will also chase small animals like guinea pigs and mice, but get along well with larger animals like cats and other dogs.

History
The Australian Terrier was the first native-bred Australian dog to be shown, and the first to be recognized overseas. Its origins are uncertain, but its immediate ancestor was without doubt developed in the United Kingdom in the early 1800s from the precursors of today's British and Scottish terriers. Some of these breeds are now extinct, but the Aussie likely has a mixed ancestry comprising the same dog types that produced today's Yorkshire, Dandie Dinmont, Manchester, Irish, and Cairn terriers.

A new rough-coated terrier was evident in Australia by the late middle-nineteenth century; the selectively-bred terrier was used for rodent and snake control, as a watchdog, and occasionally as a herding dog.

The Australian Terrier was recognized by the United Kennel Club in 1969.